The Emotional Roots of Anxiety in Children

From waves of panic to uneasy feelings that rise up from the gut, anxiety is a universal human experience. It comes as no surprise, then, that anxiety continues to be one of the most commonly diagnosed mental health issues in children and adults today, with the World Health Organization naming it as one of the leading concerns among children ages 4 to 17 worldwide. But what is anxiety and how can we help kids who suffer from it?

How do children experience anxiety?

Anxiety is usually accompanied by symptoms such as agitation, incessant worrying, trouble focusing, panic, feeling full of fear, nightmares, and clinging behaviour. My 5-year old daughter once asked, “Mommy, why does it feel like my tummy is making butter?” That churning feeling that comes with anxiety, along with many other physical and emotional symptoms, alerts us to the fact that we are stirred up. Despite reassurance from others that there is nothing to worry about, anxiety can sink its teeth in deep and hold on.

When the mind and body are in turmoil, anxiety will follow wherever you go – from your bed to the dinner table, and to school.

The problem is that its symptoms tell us very little about what is at the root of the feelings. Parents often turn to their kids for answers asking, “What is the matter?” When they are met with blank stares, puzzling explanations, or protestations of, “I don’t know!” it can elevate a parent’s anxiety as well.

The problem with anxiety is we cannot make headway unless we can make sense of it at its root level, as asserted by Gordon Neufeld, an internationally respected developmental and attachment-based psychologist. There is an epicentre to anxiety, but we often dance around its symptoms instead of reaching into its core, where the real problem lies.

Going deeper than the symptoms of anxiety

The key to understanding anxiety and how it's different from stress is to name the emotion that drives it: alarm. When a threat is detected by the brain’s surveillance system, it responds by releasing a cascade of chemicals that literally changes our physiology and enables us to quickly respond. When separation has opened up, the brain will respond with increased alarm, frustration, and pursuit in order to close the distance.

To do this, we need to first identify the most fundamental need of all humans. The one non-negotiable thing that all children and adults require for healthy emotional growth and well-being is attachment. As an interdependent species, we were designed to hunger for contact and closeness from each other, and it is through attachment that we are able to raise children, to care for each other, and create a civil society.

The purpose of attachment is to ensure that children depend on their adults to guide and protect them and that we, in turn, provide these things. When children lean into you for caretaking, they are willing to follow, listen, attend, orient to, and obey. The deeper a child’s attachment roots, the greater their capacity to reach their potential as a social, separate, and adaptive being.

If relational attachment is the greatest of all human needs, then what is the most impactful and alarming of all experiences? The answer is separation—to find yourself apart from your attachments, which pushes the brain’s alarm system into full tilt as it tries to close the void that has opened up. You can witness a young child’s desperate pursuit to get back into attachment when you tell them it’s time for bed and they begin clamouring for one more drink of water, a snack, a trip to the bathroom, another story, or plead, as one clever boy told his father, “Please come back—the spiders keep throwing me out of bed.” Separation is provocative because attachment is key to our survival.

The alarm bell of separation

There are many sources of separation that children can experience, from the obvious ones like moving houses, starting school, parents divorcing, or the loss of a loved one. But there are other surprising sources such as healthy growth, which pushes the preschooler to explore, and use their imagination, the middle-schooler to try new things, and the teenager to figure out who they are and what they want to do with their life. At every age there are different developmental issues to face, each bringing an element of existential alarm with it. As Gordon Neufeld states, we don’t teach 3-year-olds about monsters which they then become afraid of, it is their fear that creates the monsters in the first place. In fact, parents should reaffirm that monsters are not real, rather than play into a child's fear by checking under the bed, for example.

Other sources of separation for kids include discipline that uses what a child cares about against them, euphemized as “consequences”, “tough love”, or “time-outs”. These techniques use separation to alarm a child so that they will behave better but they backfire as they render an adult an adversary and, with this, reduce a child’s desire to please or work towards meeting their adult’s expectations. Relationship is the vehicle for getting a child to drive in a different direction, but separation discipline throws this off-course and leaves relational insecurity in its wake.

Separation alarm is also created when our children fuse with friends to the exclusion of their adults. Referred to as “peer orientation”, this gives rise to children with alarm problems because their peers are largely immature and impulsive, sometimes hurtful, substitutes. One day your child belongs in the group, the next day they don’t, and the fickle friendships and wounding ways of kids especially hurt those who are more dependent on their same-age friends than their adults. Friends are important, but children weren’t meant to be the answer to each other’s fundamental attachment needs.

Separation alarm can also be attributed to physical separation like the loss of a parent to a new job, travel, injury, sickness, or the introduction of a new partner. Even success can create alarming feelings as the child lives in fear that they could lose the advances they have gained. Sensitive children who feel they are too much for their parents to handle are often full of anxiety because exasperated adults convey they don’t know how to take care of them, leading to insecurity.

Separation alarm has the power to drive temporary anxiety symptoms to more chronic levels that can pervade all areas of life.

While the symptoms of anxiety and sources of separation for kids become better understood, concurrent research suggests that if separation is the problem, then surely connection will be the cure. 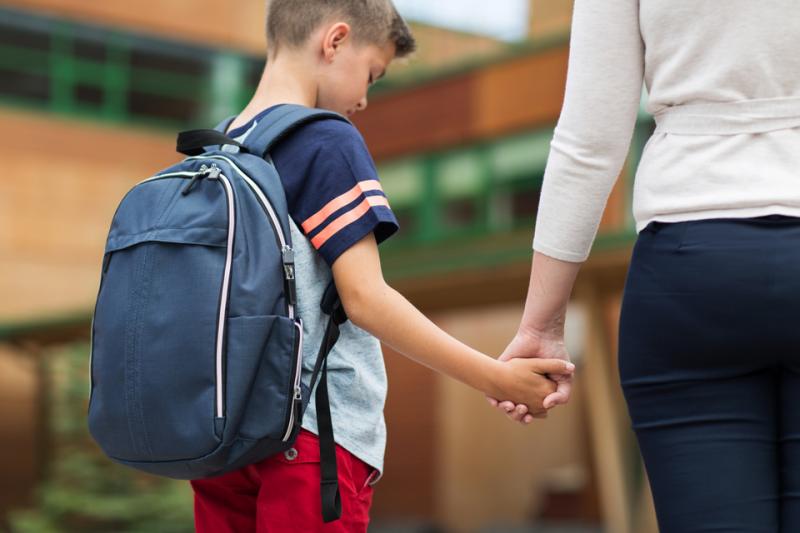 From separation to connection

What if we stopped for a moment and considered whether anxiety was, in fact, exactly what the brain wanted and intended? What if we looked at the emotion of alarm as having a very important job to do by noisily alerting parents that something isn’t right in a child’s world? And what if the brain is actually working well when it is alarmed and the problem is not the alarm, per se, but rather how long and how hard the brain has to work to gain our attention by way of anxiety symptoms, which serve to draw people close to increase connection and close painful separation voids?

There are many things adults can do to increase connection and reduce alarm, but the guiding objective should be to bring a child to emotional rest. This can be facilitated by coming alongside and conveying a desire to be with them, to show care and read their needs, and take the lead in fulfilling them wherever possible. For example, if they are anxious at night-time, being generous with contact and closeness will help them rest better. When a child closes their eyes at night, they are separated from you. Bridging this divide can involve telling them about the plans for the following day, staying with them until they fall asleep, or tying invisible strings around your beds to hold you together; if only in your child’s imagination. Making room for their alarm and letting them know it’s your job to worry about their sleep—not theirs—can go a long way in helping your child see you as in-charge, and able and willing to care for them.

If a child is anxious, it is also important to shield them from further causes of frustration wherever possible—from relationships that don’t work well to avoiding introduction of new sources of separation. When a child is alarmed, it is a time to prune out unnecessary separations and focus on tethering them to the adults in their life. This can be achieved by orienting them to the invisible matrix of adults that will care for them. For example, telling a child, “When I take you to school, your teacher will take over for me. They are in charge, I trust them to care for you, and they know how to reach me if you need me. I will look forward to picking you up, too,” helps to assure them that they are safe and loved, can feel connected to the adult who will take your place in your absence, and that you are never far away for long.

If separation discipline is being used in the home, it is also necessary to move away from time-outs and punitive consequences to more attachment and developmentally-friendly discipline, such as collecting a child before directing. This involves getting into their space in a friendly way, interacting with them in a positive manner, engaging in conversation, or paying attention to what they are focusing on, until you can feel the child warm up, start to listen, and want to follow. Using structure and routine to help them navigate their day also helps them feel safe. Kids who are anxious love ritual because it’s predictable, thus, providing security.

Make room for tears and upset

Tears are the antithesis to alarm because they serve to drain the system and allow rest by neutralizing the chemicals associated with it. One of the most important ways we can bring our children to emotional rest is to facilitate tears when they are up against things that frustrate them. From the small things to the big upsets in their life, if an adult is willing to come alongside a child and make room for some tears, this can temporarily reduce restlessness, fear, and agitation.

To help a child to their tears, we need to meet them with empathy and warmth. Focus sincerely on what is upsetting them, despite how small or insignificant it may seem to us. Sometimes a parent may become upset by what they hear from a child, but it is best not to show these emotions and to find another adult to debrief with. Every child needs to feel confident that they are not too much for their adult to handle, that their feelings aren’t too big or scary to express, and that there is no situation that they won’t receive support with.

When a child is anxious, what we cannot lose sight of is how separation instigates the alarm behind it and that relationship is the vehicle through which healing occurs. When a child can safely feel their fear in a vulnerable way, they will be on the road to making sense of the emotions associated with alarm. When they can see and name what it is that stirs them up, and can freely express their emotions, they will be brought to emotional rest and find the courage to face the hard things. This process of holding onto and guiding them through alarming feelings and times will help them reaffirm the faith they have in their caregivers to love and take care of them exactly as they are.

Meditation is one practice that can help ease anxiety—if you can get your child to sit still long enough. If not, try these alternatives to meditation with similar benefits.