Why our neighbourhoods should be an extension of our homes
By Vanessa Farquharson , 12 April, 2017

If you say the words “street play” today, most Canadians will conjure up images of kids playing ball hockey or pickup basketball on a quiet suburban road — think of that scene in Wayne’s World. If you ask whether street play is legal, most won’t be able to give you a definite answer (it changes, of course, from municipality to municipality and is often simply a bylaw that prohibits it but is rarely enforced).

Things were very different in previous decades, as a new exhibit at the City of Toronto Archives called “From Streets to Playgrounds” shows — the description provided by the Archives describes the collection of black-and-white images from the early 20th century as one that “captures the kids at work and play in a growing, dirty and dangerous city. Photographers found them in laneways, backyards, behind houses, on construction sites, sitting on stoops and staircases.”

They almost make it sound like a bad thing, as though the kids were an infectious plague upon an already derelict or hazardous city. This is most likely what the general opinion was at the time, and in poorer neighbourhoods especially there weren’t enough playgrounds to keep children engaged in “safer” or more wholesome activities. But look closely at the images and you’ll see smiling faces, kids horsing around, making creative use of whatever materials they could find around them and, yes, taking some ownership over the local roads. The curator of this exhibit, Adrienne Chambon, tells Inside Toronto, “At the time, the street was a continuation of your house.”

Today, we’ve gone so far in the other direction — apart from the very occasional game of ball hockey — that kids often have no idea who their neighbours are, let alone what games they might be interested in playing together. It now comes as a surprise to see a hopscotch course chalked onto a stretch of sidewalk. Generally, if one catches a glimpse of children running on the street, the impulse is to yell at them to get off. 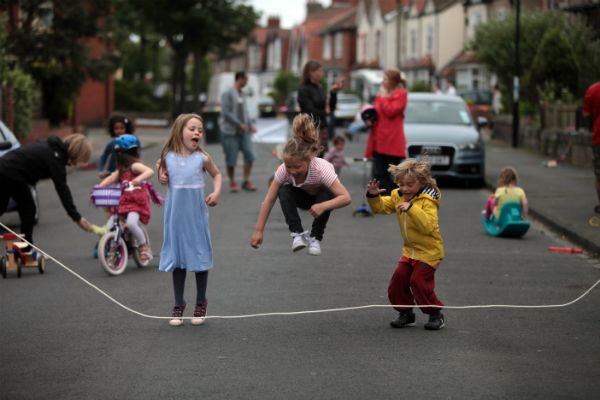 Fortunately, attitudes are changing. Parents are becoming aware of the negative effects on their children’s physical and social health when they are overly risk-averse and are looking for ways to give kids more freedom (in a way that’s still safe, naturally). There are also different ways for neighbourhoods to come together these days — Facebook groups help facilitate dialogue around community-specific projects or issues, and events like farmers’ markets help to bring people out of their houses and meeting one another.

Here in Toronto, Earth Day Canada is helping to facilitate change as well — this month, our EarthPLAY team will be launching the Toronto StreetPLAY Pilot Project, which will see us working with the City of Toronto, local councillors, residents’ associations and play co-ops throughout this year to establish an easy, accessible permitting process for regularly scheduled street closures during after-school hours and on the weekend. We’ll also be conducting a study with Ryerson University into the benefits of street play to a surrounding community and the effectiveness of such a permit process.

Our project comes in the wake of a landmark vote at City Hall: Last spring, the provincial Minister of Children and Youth Services, Michael Coteau, asked the city in an open letter (and on Twitter) to lift its ban on ball and hockey playing in local streets, which had been in place since the ‘80s. He argued that it was one so rarely enforced – local residents could even cite instances where police officers would stop their cruisers, walk over and ask to join the game – that it made no sense to maintain it. Overwhelmingly, council voted in June, 2016, to lift the ban and start testing new street play options.

For the Toronto StreetPLAY Pilot Project, we’re looking to Seattle for inspiration. The west coast city’s Department of Transportation (SDOT) in 2013 launched an initiative called Play Streets, developed as part of the city’s Public Space Management Program. They have a handbook for local residents, a five-step application process, direction on how to inform neighbours and properly barricade streets, and signage provided by the city – plus, Seattle is very similar in terms of population and traffic to Toronto. 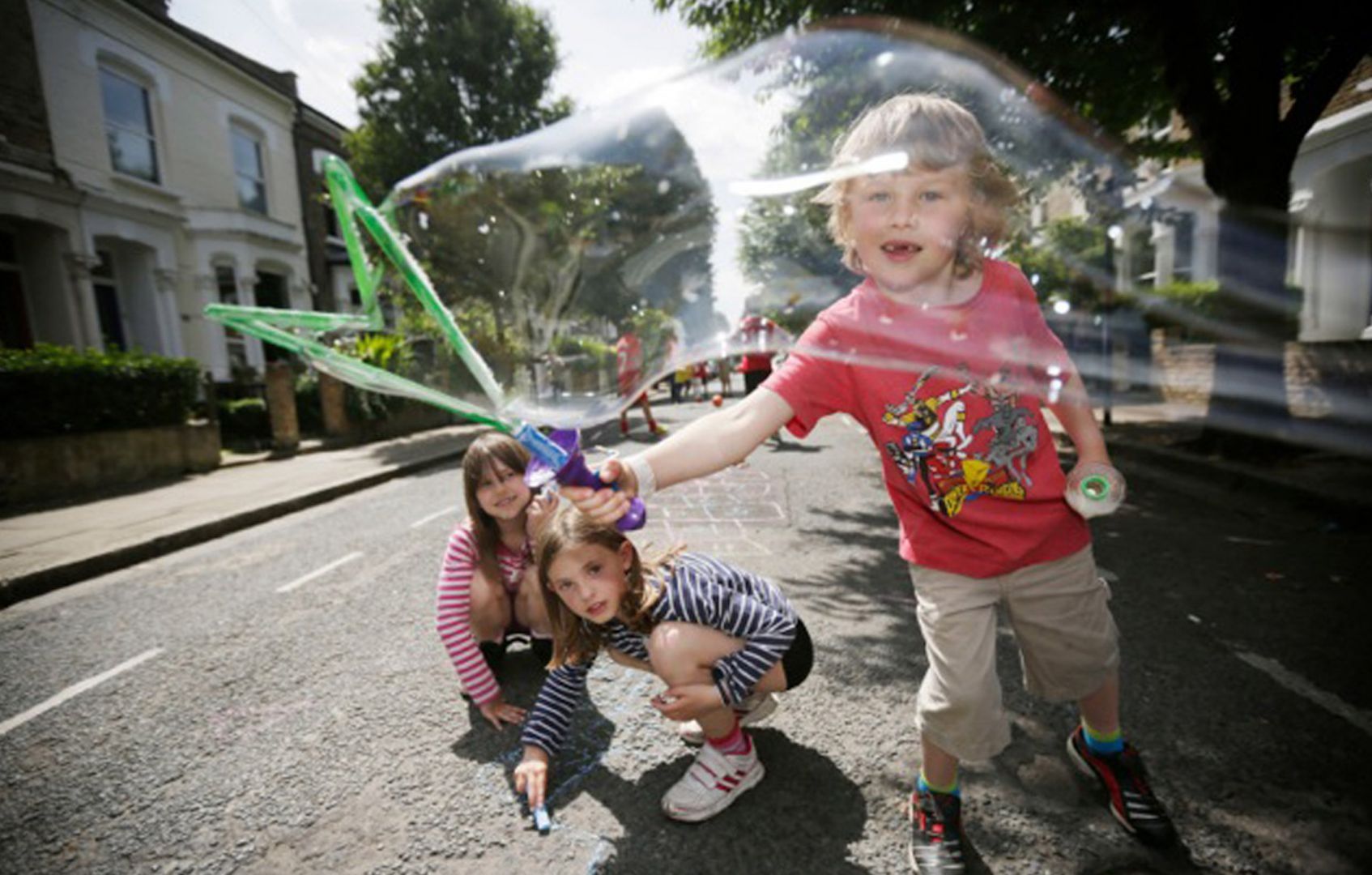 Earth Day Canada’s goal is not to swing the pendulum all the way back to 1920, but to tap into that concept Ms. Chambon mentions, of our streets being a continuation of our homes. If we can reclaim our neighbourhood streets for play and socializing, even for just a few hours a week, we can give our children more time to be active outdoors (without a carbon footprint), we can get to know the people we live next to, and we can promote safe roads. There will always be something nice about having a big backyard, but if these changes start to happen, we may start valuing the front yard a little more.

To learn more, go to www.streetplay.ca.