Bring Back Outdoor Play to Our Indoor Kids!

Half of my local park in a west-end Toronto neighbourhood is comprised of traditional outdoor play equipment—slides, monkey bars, seesaws, and swings. The other half is filled with discarded push-cars and plastic forts, which parents have brought from nearby homes and left here for whomever might want them.

Most of the used toys have missing wheels or broken doors, most of the playhouses are faded, rickety and lying on their sides. But my three-year-old son almost always prefers this so-called junk to the actual play equipment—and he’s not the only one.

The kids who come here will spend hours reconfiguring this stuff into new structures: Three disassembled playhouse walls make the shape of a giant boat, with the windows forming small portholes where only kids can enter; older children stack the houses on top of one another and attempt to climb to the top. 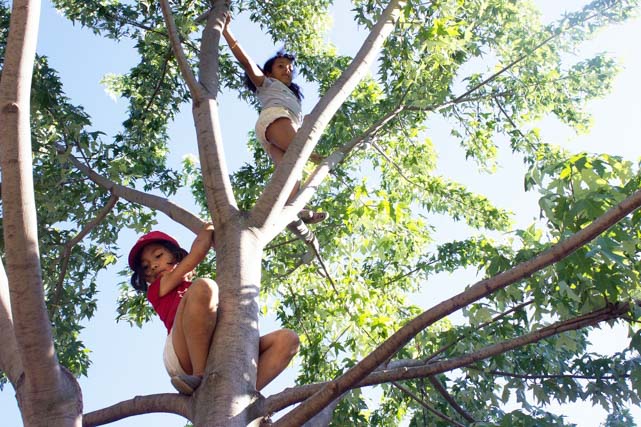 Kids just want to play (outside)

The more time one spends watching children play, the more it becomes obvious that slides and monkey bars are all right, but sometimes not quite good enough. There’s very little in the way of imagination, creativity, collaboration, novelty, or even risk-taking in the act of going down a slide (which is why you so often see kids trying to run up them or, in the case of tube-shaped slides, climb on top of them).

If kids are getting bored in our playgrounds, they turn to other forms of entertainment instead: TV, movies, video games, apps, and social media. Without question, they are stuck indoors more; in fact, the average North American child spends less than one hour engaging in outdoor play each day—that’s less than most prison inmates or even free-range chickens receive.

The average North American child spends less than one hour outside each day—that’s less than most prison inmates or even free-range chickens receive.

There are many reasons why this isn’t good. For one, it’s taking a serious toll on the next generation’s health and wellbeing. The Canadian Physical Activity Guidelines for Children and Youth recommend 5- to 17-year-olds get at least one hour of physical activity per day, but data from Statistics Canada reveals only 9% of kids are meeting that target. The result is a generation that is more at risk for developing heart disease, high blood pressure, diabetes, and mental health issues.

Furthermore, children who don’t get outside—who aren’t stimulated by their environment, who don’t connect with their inner nature as well as the nature beyond their front door—won’t grow up with any motivation to protect our planet. Our kids need to touch, breathe, take advantage of, and learn from the environment we’re asking them to care about.

The people I work with at Earth Day Canada are doing something about this. In 2017, we launched a new program called EarthPLAY with the goal to bring self-directed, outdoor play back into the day-to-day lives of children. There are different initiatives within this program, but arguably the most all-encompassing is ParkPLAY, which is centered on bringing “loose parts” adventure play into public parks and other shared green spaces.

What on earth do “loose parts” and “adventure play” mean? If you’re of a certain age and you grew up in Toronto, you may remember the adventure playground that once existed at the foot of Bathurst Street. It was undeveloped land, crammed with planks of wood and old tires, ropes, hammers and saws, nails, metal scrap, and whatever other bits and pieces (ie. loose parts) people brought from home. A rickety fence surrounded the place and a handful of grown-ups would usually be there to casually supervise the play, but it was by and large an informal setup.

Kids came here to build forts and towers, bridges, rope swings, mud kitchens, and more. Some structures became more permanent, and these got painted with bright colours, decorated with homemade curtains and flags. There was a water source for mud play and a small vegetable garden.

The type of play that results when we send kids outside with a bunch of random objects and materials, telling them to create whatever they please with no “helicopter parenting”, is called adventure play. It has been steadily disappearing from cities across North America since the 1980s, when risk-averse parents, lawyers, and bureaucrats started “protecting” children by redesigning playgrounds to feature gently sloping slides, see-saws that don’t require a second person, and monkey bars that rest about four feet from the ground.

Earth Day Canada’s EarthPLAY team has been working very hard to resurrect adventure play through its POP-UP Adventure Playgrounds, which are usually co-hosted with local community groups across the Greater Toronto Area (as an example, we work quite often with the Toronto Free Play Co-op, which is comprised of parents and other engaged residents in the Seaton Village neighbourhood).

What we keep hearing from parents and caregivers who attend these POP-UPs is sheer astonishment at how long their kids will play uninterrupted, how focused they are on building or creating something, and how well they cooperate with others of varying ages, backgrounds and abilities.

From the perspective of an environmental organization, we see how all of this ingenuity and experimentation, community-building, and calculated risk-taking in an outdoor environment can help to create a new generation of eco-leaders. We see the strong relationship between outdoor play and environmental connectedness—and how this can really complement traditional stewardship initiatives that kids might take part in, such as river clean-ups or tree-planting. 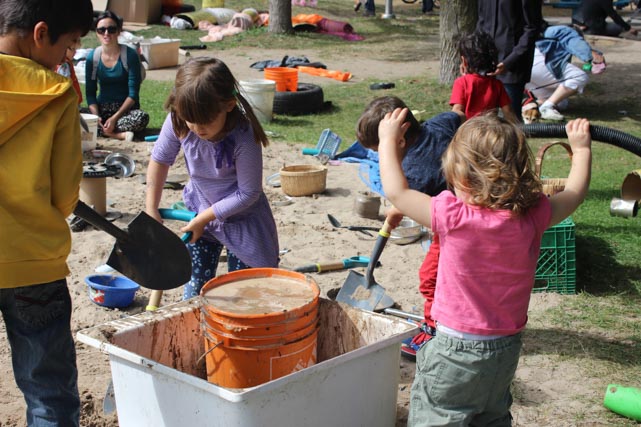 How to get involved!

Here are a few easy ways you can support the outdoor play movement, either across Canada or right in your own neighbourhood: