Dangers explained and what you need to know
By Kathleen Cooper, 08 May, 2016

Healthy brain development is complex and depends on many factors. Despite this complexity, basic principles always apply. Parents know that the best guarantee of a healthy brain includes good nutrition, clean water, positive mental stimulation, enough sleep. They also know that the developing brain is vulnerable and needs to be protected from exposure to toxic substances.

Environmental hazards and the developing brain

Beginning in early pregnancy and continuing until the end of adolescence, brain development is a wonder. Each developmental stage builds upon previous stages. If early development is altered, further development can be compromised. In the womb and during childhood, toxic substances like lead, mercury, and some pesticides can thwart brain development, with lifelong consequences, and as such they are a much greater risk than in adulthood.

Most “EcoParents” know about the risks of old lead paint or the benefit of organic foods to limit pesticide residues. Hopefully they also juggle the contradictions about fish – eat fish for healthy brain development but follow fish advisories to limit the brain-harming effects of mercury. 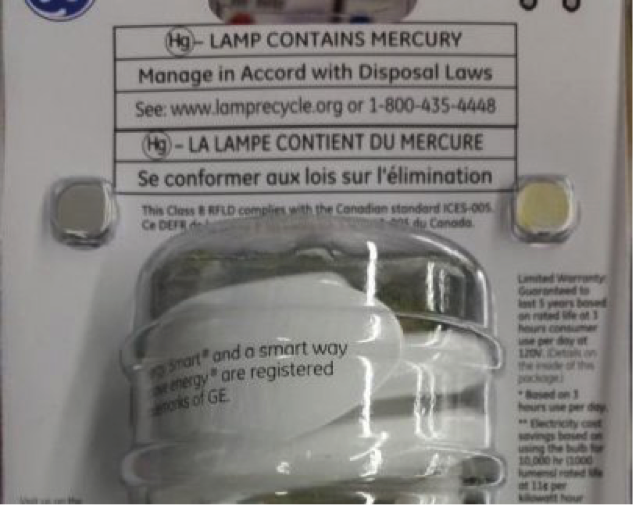 An important source of brain-harming mercury is broken compact fluorescent lightbulbs or CFLs: those often twirly-shaped bulbs that have taken over from the older incandescent bulbs since the mid-1990s. Recent changes in federal energy efficiency rules serve to phase out the older incandescent bulbs. Now upon us is yet another transition towards greater energy efficiency with LED (light emitting diode) bulbs.

This transition to LEDs will be slow since LEDs, life CFLs, are pricey. CFLs also last a long time, as they should. But when CFLs are done, or get broken, many people do not realize that they are hazardous waste. Nor is there enough public awareness that a broken CFL creates a mercury hazard that is too close for comfort in our indoor spaces – at home, at work, or alongside poorly maintained vendor take-back bins in some large retail outlets.

Despite longstanding outreach campaigns, widespread ignorance persists about mercury in CFLs. Risks are either unknown or downplayed and there is a lack of awareness about proper disposal methods.

At the Canadian Environmental Law Association, we had a volunteer visit dozens of large stores to canvas the CFLs on the market and to view CFL recycling bins. Although a small survey, the results were disturbing. Often, no facilities existed at all. Where we found CFL recycling bins, they were often poorly maintained or misused. Some bins had long fluorescent tubes sticking out the top, breaking the seal on the bin which would allow the release of mercury vapour from any broken bulbs inside. Signage on bins to avoid placement of the long tube lights was ignored, as pictured below. 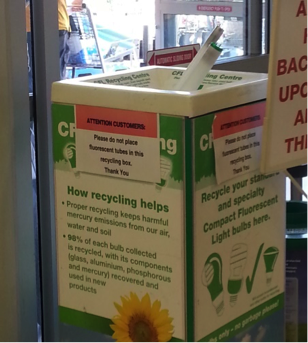 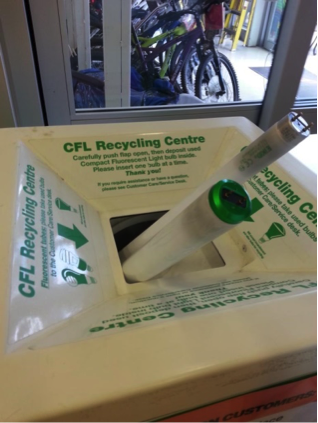 CFLs were first introduced in the 1980s. Widely adopted in the past two decades, millions of CFLs have been sold and used across Canada. While regulations have reduced their mercury content we have a significant disposal problem for the next five to ten years as this technology shifts.

In recent advocacy on this issue, environmental and public health groups, for example through the work of the  Canadian Partnership for Children’s Health and Environment (CPCHE), seek a Canada-Wide Standard for Extended Producer Responsibility on CFLs to ensure safe use and a comprehensive disposal plan. In a complementary effort, Liberal Darren Fisher, MP for Dartmouth – Cole Harbour is advancing a private member’s bill that would create a national strategy for safe disposal of CFLs. These efforts recognize that many municipal waste management programs will take CFLs at hazardous waste depots and CFL recycling facilities exist across the country. The public needs to know about them and take up this challenge.

Not only do broken bulbs create a mercury hazard in our homes, current efforts to recycle them fall dismally short. Environment Canada estimates that about 10 to 15 percent of CFLs sold in Canada are recycled; the rest go to landfills. Or, as we found in our small survey, where CFL disposal facilities are available in retail locations, they can be poorly maintained, creating exposure hazards to customers and especially to those working nearby.

We collectively have a window of time over the next fifteen to twenty years to get this right but the time to act is now. Although each CFL contains only a tiny amount of mercury, taken together, millions of them will mean a lot of mercury into the environment. More important, like so many other highly toxic substances, toxicity occurs at very low levels. A broken bulb means direct exposure in the home, and children are at the greatest risk.

What do I do if a compact fluorescent light bulb (CFL) breaks?

Some people recall playing with mercury as children. As slippery, shiny globules, liquid mercury is fascinating stuff. My memory is very different. Back in the 1960s, I vividly recall my mother getting very agitated when a mercury thermometer broke, spilling those tiny little silver blobs across the floor. Obviously concerned about the broken glass, she was more concerned that the mercury was a poison that needed to be cleaned up fast. If memory serves, she only threw it in the garbage and so did not properly address the hazard but I am impressed to this day that she knew about the risk.

The mercury vapour released from a broken CFL is odourless and colourless so it is not readily easy to accept that it can harm the developing brains of fetuses, infants, and children.

If a CFL breaks in your home, chances are you will be surprised at the level of care recommended to prevent mercury contamination of your home. Experts recommend the following:

Clean-up on carpets or rugs:

The Earth 911 website provides a searchable database (based on postal codes) for disposal and recycling centres in Canada, the US and internationally (http://search.earth911.com).

Connecticut Department of Public Health. Compact Fluorescent Light Bulbs: What to Do if a Bulb Breaks.